Magician was one of our horses. He entered our lives in August 1999.  He has lived at Blairwood Farms ever since.  We were fortunate enough to experience his brilliant racing career throughout the last seven years, watching him achieve many awards and titles.  We have cared for him through good times and bad and enjoyed every moment.  He is part of our Blairwood family.  Magician has achieved a 1:52:2 Lifetime mark.  He was the winner of 49 races.  His lifetime earnings are $3,579.103.  He retired the leading 1:55 Trotter of all Time (28) and was the Seventh Leading Money Winning Trotter of All Time.  In August 2003 Magician earned the award of the Leading Money Earning horse at the Meadowlands Racetrack.  The time has come for Magician to retire from his phenomenal racing career and we are proud that he will live out his retirement here at Blairwood Farms.

On April 18, 2004 our hearts were saddened with the sudden passing of our friend William C. (Bill) Augenstein, Magician’s owner.  He was a special man who loved his horse and always looked out for Magician’s best interests.  He will always be missed.  Bill’s wishes for Magician were for him to live here at Blairwood Farms when he retired from racing.  Those wishes are coming true.  Magician’s ownership will be transferred over to Leslie McLaren in 2005.  He will remain at Blairwood Farms continuing to be the most spoiled horse on the farm.

Final Chapter On September 17th, 2008 we lost our beloved “MAGICIAN”  Again our hearts were saddened with his sudden passing.  So many beautiful memories we shared.  He was a very very special horse and touch our lives and so many others that were involved In his racing career.  We will always miss him, he will be forever in our hearts!! 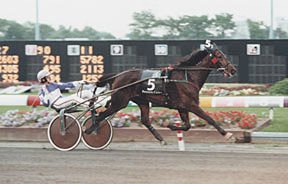